Complete the following for time of: 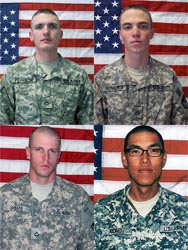 On Nov. 5 2009 at 1:34 p.m., a terrorist named Major Nidal Hasan attacked fellow soldiers and civilians at Fort Hood, TX. He killed 12 soldiers and one civilian and wounded 43 others.